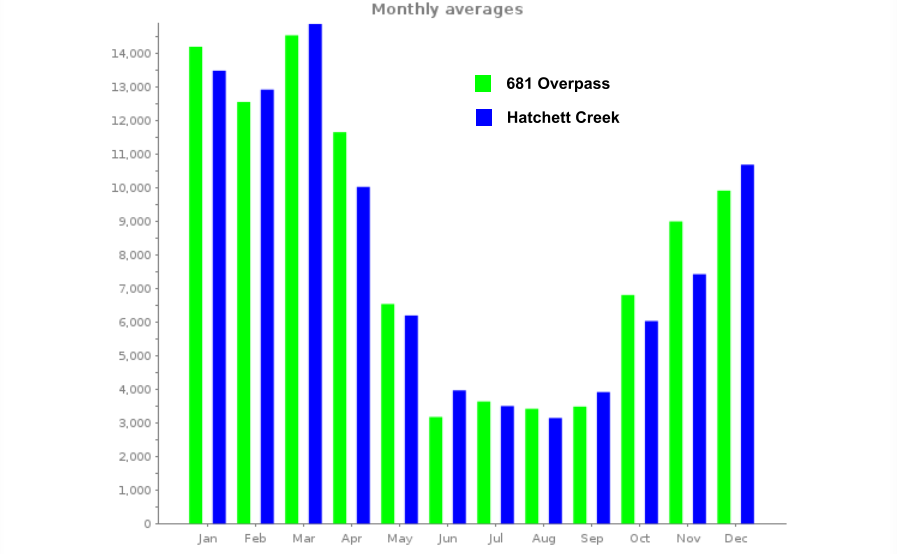 Are you one of the estimated 175,000 annual users of the Legacy Trail?  Probably so, if you are reading this.  Great news!  There were 55,000 more of you on the Legacy Trail in 2016 than the 120,000 reported in each of the last few years.  Many of you have asked us why the number of trail users has seemed to, well, stagnate when it appears there is a growing number of people enjoying the trail.

We wondered about that also, which prompted us to do a year long deep dive study on the three TRAFx brand passive infrared counters used on the trail to gather raw data, and the algorithm used to convert the raw data to an annual users count.  FLT purchased and installed the counters in 2012.

In short we combined online and on-the-trail surveys of the type of users (e.g., cyclist, runners, walkers), the most frequent entry points to the trail, the typical distance traveled (length of trip, and whether it was one-way or round trip on the trail).  A FLT member with considerable professional statistical experience was unable to find a suitable mathematical model, so he developed one.  Warning, the math is not for the faint of heart!  We also calibrated the counter data with actual observations, noting that closely spaced users were not being properly recorded by the counters.  As recommended by the TRAFx counter manufacturer, we applied an adjustment factor to the counter data.  Click here to see the FLT letter to the County Commissioners and supporting details.

While it is great news to recognize the much higher number of annual users of the Legacy Trail, the 175,000 annual user estimate remains very conservative.  Anecdotal evidence suggests the passive infrared counters may also be unable to accurately distinguish a human with a body temperature of 98.6 degrees passing up to ten feet away when the ambient temperature here in Sarasota is often in the 80s and 90s.  We will continue to examine this issue.

In the meantime, enjoy the trail knowing that you are one of 175,000 annual users.  This higher user count adds considerable support to efforts to extend the trail to downtown Sarasota.