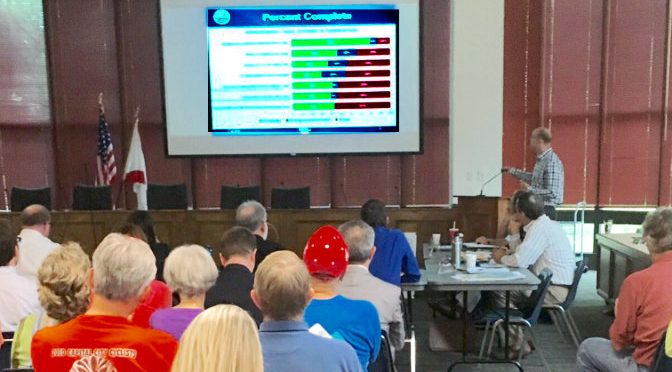 The Florida Greenways and Trails Council (FGTC) selected the The St. Johns River to the Sea Loop as the next regional trail for SUN Trail funds at an all-day conference in Tallahassee on March 30th.  This mostly rural trail, which crosses five counties in the upper east central portion of Florida around St Augustine, is now eligible for about $8 million per year in “Tier II” Sun Trail funds provided by the Florida Legislature in 2015 until the trail is completed. 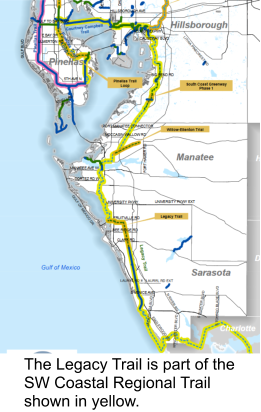 The Capital City to Sea Trail, centered around Tallahassee and four counties, came in second place. The 280 mile South West Coastal Trail, which spans seven counties from St Pete through Sarasota (including the Legacy Trail) to Naples, came in third place among the seven finalist regional trails across Florida.

I went to Tallahassee on behalf of the Friends of The Legacy Trail as part of the team promoting the SW Coastal Trail.  Our entire team had worked very hard and was optimistic.  We had the most letters of endorsement from major community entities.

But as I listened to the individual presentations, my optimism about the superiority of the SW Coastal trail morphed into admiration for all that was being done building local and regional trails across the state.  The FGTC staff had scored all the trails nearly equally against 10 criteria – no help picking the single best.  Representatives for each regional trail gave convincing presentations on the merits of their regional trail.  We had the “A” team making our best case for selecting the SW Coastal Trail.  But by the end of the presentations, I wasn’t sure which single trail I would pick if I was on the FGTC.

So we came in third place in a state wide regional trail building competition.  That’s certainly something to be very proud of.  FDOT, which administers the SUN Trail funding and implementation, had told the FGTC they would recognize the top three regional trails for “Tier II” SUN Trail funding.  As the third place finisher, we are now on the FDOT radar should the St John or Capital Cities trail be unable to spend all the funds in a given year, a remote but not unheard of situation.  And The Legacy Trail will certainly be competitive for some of the annual $8 million “Tier III” funds for individual trail projects across the state.  FDOT will begin the “Tier III” selection process this summer.

After the deliberations were concluded, many of the FGTC members commented about how the outstanding trail building opportunities far exceeded the $25 million annual SUN Trail funding (the Coast to Coast trail from St Pete to Titusville gets “Tier I” $8 million per year).  Perhaps the next FGTC and others should consider taking this message back to the Legislature.

We have established important connections with key organizations, and who knows what dividends that offers in the future.