Since 1989, Sarasota County has levied a one-percent sales tax which can be used only for local infrastructure improvements. Seventy-five percent is allocated to the County and its municipalities ( Longboat Key, North Port, Sarasota, Venice ). Twenty-five percent is allocated to Sarasota County schools. This sales tax has a sunset provision, meaning it will expire on December 31, 2024, unless it is renewed for 15 years. ( It was extended twice before. ) On the general election ballot being held November 8, 2022, Sarasota County voters will be asked whether this tax should be continued.

As required by state law, proposed uses ( project list ) of the sales tax monies must be identified in advance of a vote. Sarasota County is earmarking nearly $80 million for its park and recreation system including monies for: a Nathan Benderson Park Connector Trail, a Bicycle and Pedestrian Improvement Program, and a Safe Routes to Schools and Legacy Trail Connectivity Program. The City of North Port is committing money for a Legacy Trail Extension Trailhead and Warm Mineral Springs improvements such as trails, bridges, and picnic shelters. The City of Sarasota will use the sales tax dollars for the Bobby Jones Nature Park and a potential “North Legacy Trail.” All these governmental bodies receiving revenue have plans to improve parks and/or streets and sidewalks.

Interestingly, the project list is part and parcel of the vote, meaning the new tax dollars must be used for the projects already identified. A Citizen Tax Oversight Committee is created ( maintained ) to ensure proceeds are used only for infrastructure and listed projects.

At its meeting on July 11, 2022, the Friends of The Legacy Trail Board of Directors unanimously approved a resolution supporting continuance of the sales tax. That resolution states in part: “… ( the eligible units of government ) have identified park and transportation projects which would either directly benefit the Legacy Trail and its connectors or which would enhance destinations our membership would enjoy and utilize ….”

If you are a Sarasota County voter, please consider the merits of the one-percent sales tax extension and vote accordingly on November 8.

Want to support the trail and be recognized with your name, or your business name, on one of the trail amenities. Sarasota County, in cooperation with Friends of The Legacy Trail, has just launched a new program that allows you to sponsor many types of trail amenities, including stop stations, shelters, benches, playgrounds, and more.  Check out this brochure for more details and sponsorship rates.

The Info Tables Are Taking a Break for the Summer. See you in the Fall!

The seasonal Friends of The Legacy Trail information table is moving from its usual Bay Street location to the Ashton Street trailhead on the Legacy Trail at 4301 Ashton Street, about a block west of McIntosh Road. The table is open on most Saturdays from 9:00 a.m. to 12:00 p.m. Parking is available at the trailhead and at the 360 Church on the east side of the Legacy Trail. We’ve just received a fresh batch of caps and t-shirts for sale. You’ll also find information on trail development, FLT memberships, FLT’s square foot campaign, and more. Stop by and see us!

I’d like to take a moment to thank the FLT Board members for their amazing passion, insight, and drive to support our beloved Legacy Trail in the last year.  We achieved an incredible victory with 71 percent voter support to spend $65 million to extend the Legacy Trail to downtown Sarasota and better connect the city of North Port to the Legacy Trail.  Extension efforts are well underway!

The FLT board has embraced new long range goals.  We have contributed substantial improvement to the existing trail, e.g., a new water fountain at Osprey Junction Trail head, funded relocating the Legacy Trail road sign from Laurel Road to Bay Street, planning and funding a new rest stop by the trestle at Oscar Scherer, reduced our operating costs by eliminating the need for rented storage space.

I also want to thank all the FLT members and volunteers who support our organization with their funds and volunteer their time to support the trail.  As a six-month snowbird from Maine, it is very challenging to remain engaged in all the FLT moving parts from a distance of 1,600 miles away.  Our Vice President, Louis Kosiba has agreed to assume the role of President, and I will take his position as Vice President.

“The South Creek Stop Station and Learning Area” is being created at South Creek adjacent to Oscar Scherer State Park. Funding from the Jelks Family Foundation and Friends of The Legacy Trail is making this project possible.   The area will include a bench, bike rack, kiosk, viewing area for the historic railroad trestle, various Florida native trees and plants and an official Sarasota County historical marker explaining the significance of the railroad to our community. Trail users will be able to view the historic railroad trestle, learn about Florida native plants and relax in a natural, enjoyable setting.

Phil Smith, State Licensed Landscape Architect, and Kate Johnston, Landscape Designer, from DWJA Landscape Architects have donated their time and expertise to create a site and construction plan. Sarasota County Parks, Recreation and Natural Resources staff have also been working on the design. Friends of The Legacy Trail will be managing the project. Darryl Lang, FLT Board Member, has worked tirelessly to get this project accomplished.  Construction should begin in a few months.

The Friends of The Legacy Trail Speakers Bureau is looking for individuals who are comfortable presenting to a wide variety of groups to spread the word and excitement about The Legacy Trail.  Our Speakers Bureau was a very big part of our work to promote the Legacy Trail Extension Referendum by informing Sarasota County Voters about the important facts related to the project.  Although the Referendum has successfully passed, we continue to receive requests from community and neighborhood groups, service and business organizations, etc., to provide speakers to inform their membership about the trail.

We have an important story to tell about our history as well as the ever-changing plans for the newly approved extension and possible connections to the trail.  Keeping the public informed as we move forward is very important to our mission and helps us honor the support the voters have shown for The Legacy Trail. We have developed a Power Point presentation that helps tell our story and we will provide the equipment and materials for these events.

Sound interesting?  Need a little more information?  Let us know!  Contact us here. We will work with you to become familiar with the materials and make sure you have all the information you need.

Join us on Sunday, March 24, 2019 for the annual Tour de Parks Bike event. The ride features distances of 21, 35 and 62 miles, going through 12 scenic parks in Sarasota County. You may get more information and register now from here, or or go directly to Active.com. You can pay online, or download a form and mail it in. The ride will once again have a wonderful breakfast catered by First Watch, snacks at rest stations sponsored by Doctors Hospital and Lunch by Mattison’s. All this and a t-shirt (for the first 650 riders –size restrictions available on line) for $40 (plus Active fee). The prices go up starting February 28, so register early. The ride will begin at the historic Venice Train station. The ride will be held rain or shine.

Final Routes are still being confirmed and will be posted on our website. There will be packet pick-up prior to the event at Real Bikes, Bikes International and Sarasota Bikes. Details will be sent prior to the ride and posted at the link above. Last year we had close to 800 riders. We will have a Bespoke Jersey for sale and will have that information available on the website once the design is complete. If you would like to sponsor a mile marker or see other sponsorship opportunities, please contact Michelle Stanley.

Friends of The Legacy Trail is a newly registered organization with the Amazon Smile Foundation! We are now eligible to receive 0.5% of your Amazon Smile purchases made here: http://smile.amazon.com
No additional cost to you! But donations from Amazon Smile will go directly to FLT!

Amazon Smile is the same as ordering on Amazon.com except you can select from a list of eligible organizations and designate one to receive a percentage of your purchase price from Amazon Smile Foundation. (Amazon does not charge any administrative fees or take any deduction from the donation amount and there is no cost to the charitable organization.)
It’s easy-start shopping! Select Friends of The Legacy Trail!!

Thanks to Joan Attenberg for setting this up for us! 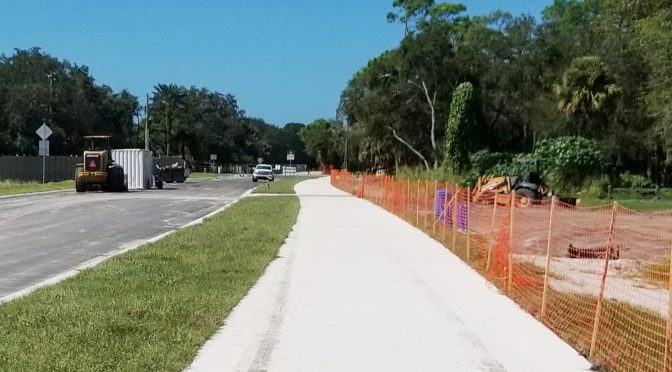 The popular Osprey Junction Trailhead will soon reopen with the completion of the Bay Street extension to Honore Ave. Palmer Ranch residents will have a new way to reach the trail, complete with bike lanes and a multi-use pathway. One downside, however, is the lack of bike and pedestrian infrastructure on existing Bay Street between the Legacy Trail and U.S. 41. This sleepy narrow street is about to get busy!

A group of Osprey residents, alarmed by impending safety issues from increased Bay Street traffic, decided to do something about it. They raised the issue multiple times before the County Commission. They met with County staff. They engaged their fellow residents in the area. The county quickly agreed to re-stripe the road, add signage, and paint “sharrows” on the street. But a pathway or bike lanes were considered cost prohibitive.

The group, organized as COTS, the Coalition for Osprey Transportation Safety, pressed on. Persistence paid! Commissioners eventually directed staff to find a creative solution. They did. Last week, following a public hearing, the Commission agreed to allow a developer on Englewood’s River Road to construct a Bay Street sidewalk in lieu of their obligation to build a sidewalk adjacent to their new development on River Road, which would connect to nothing and be replaced when the road is widened.

With this agreement, a 5-foot wide sidewalk will now be built along the north side of Bay Street between the Legacy Trail’s Osprey Junction Trailhead and Old Venice Road, offering a safer route for everyone. Completion is expected by February 2019.

The donation will help sponsor a beautiful new landscaped stop station and learning center to be located in the grassy area just north of the train trestle adjacent to Oscar Scherer State Park.  FLT will also contribute funds for this project.

From Howard Jelks, Director of the Foundation, “Our family is very honored to participate in creating a place where folks using The Legacy Trail can learn about the railroads and native plant communities around them.  Dr. Allen Jelks, Sr. is very active in railroading circles — both in remembering the past and promoting rail travel in the future.  The late Dr. Mary Jelks was an energetic environmental activist who inspired others with her love and passion for natural plant communities”.

We look forward to adding another great amenity to the trail.  Thank you Jelks Family Foundation and all FLT donors who help make projects like this possible.

Here is the concept plan for the new rest facility: 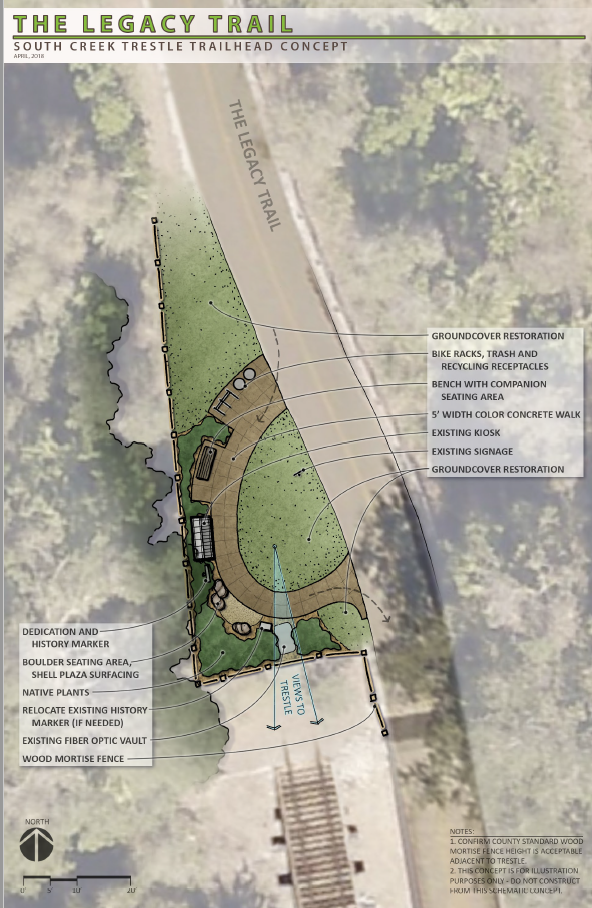