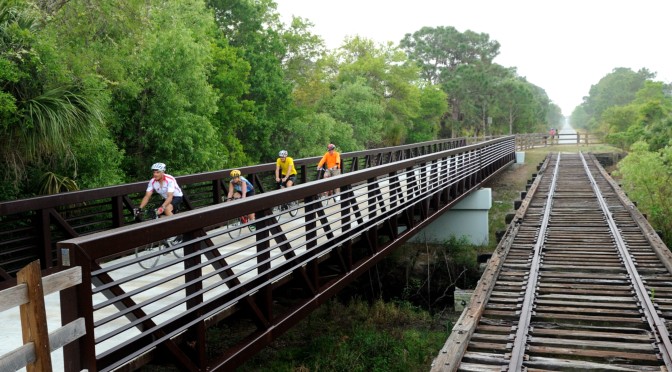 After some 9 months of “nothing new to report,” the month of February brought a fresh wave of rejuvenating good news to extend The Legacy Trail to Payne Park in downtown Sarasota.

The best news was that the Florida Department of Transportation (FDOT) was terminating efforts to acquire the rail corridor from its owner, CSX Railroad, and returning that process back to Sarasota County.

FDOT efforts, begun last spring, were seen by many as a mixed blessing.  It began with word from CSX, not FDOT, that they were ceasing talks with the County amid discussions with FDOT acquiring 100 miles of rail corridor across the state, including The Legacy Trail extension.  FDOT later released a brief statement that their interest was to create multi-modal corridors – typically an urban corridor optimized for short and medium trips using transit lines (light rail, express bus) with an adjacent pedestrian and bicycling path.  Such corridors have been successfully used in a handful of states, according to Rails to Trails Conservancy.  It was considered but not recommended in the March 2015 County commissioned feasibility study to extend The Legacy Trail.

That FDOT has much deeper pockets to acquire the trail and finance construction than the County was viewed by many as a major potential benefit. However, despite periodic requests for updates, FDOT was never forthcoming about their plans.  Would The Legacy Trail extension be tied to time consuming conflicts at other locations?  Spring turned to summer, which begat fall, then winter.  Still no word from FDOT.

Extension advocates were jubilant when the Sarasota County Commissioners unanimously accepted the Feasibility Study on April 1, 2015, and directed the County Executive to begin discussions with CSX and pursue an independent appraisal of the rail corridor.  All that momentum was surely slipping away behind closed doors in Tallahasee.

Fortunately, the County Commissioners shared the same concerns, prompting one Commissioner to meet with the FDOT Secretary in Tallahassee in early February.  Shortly afterwards, the County confirmed that FDOT “will be terminating their negotiations to acquire the right of way” from CSX.  “That shifts the next steps/negotiations back to Sarasota County for the portion that we are seeking.”

It remains unclear what progress, if any, FDOT made in acquiring any unused rail corridors from CSX.

The County is now back in the conductors seat for the trail extension.   Hoorah!  The County reaffirmed they and partner The Trust for Public Land would promptly restart discussions with CSX.  Thank you to the County Commissioners for interceding and getting the extension back on track!