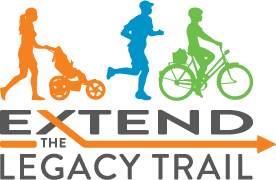 As 2017 came to a close, two words sum the view of most people when asked about efforts to extend the Legacy Trail:
GRATITUDE for the County buying a nearly 3 mile segment of abandoned rail corridor from CSX Transportation, Inc. in December; and OPTIMISM for a planned County-wide voter referendum in November 2018 to buy  the remaining rail corridor to downtown Sarasota, build a complete, paved trail with two overpasses and amenities, and help better connect North Port to the Legacy Trail. That gratitude was compounded with elation following news that FDOT had included $7.5M  in a future budget to support the extension.

FLT has now started its private fund raising “Square Foot” Campaign, raising over $24,000 in just a few weeks.  All funds will be used exclusively for construction and amenities along the extension.  We are hopeful that our partner local foundations will also find generous philanthropist willing to contribute substantial sums to the construction effort. We also believe that having purchased a segment of corridor, and having the remaining segment under contract, will now make us much more competitive for other state and federal funds.

As we begin 2018, we are thrilled that there is a clear path to extend the Legacy Trail to downtown Sarasota, and create a better connection to it from North Port.  That path would link the two largest population centers of the county.  AND, It can all happen in the matter of a relatively few short years.

With the start of the new year, we have already begun expanding our advocacy efforts to prepare for the referendum next fall.  We are holding information tables at Farmers Markets in North Port, Venice, Sarasota, Phillippi Creek.  We are also exploring other high pedestrian volume opportunities to engage the public on the benefits of the extension.