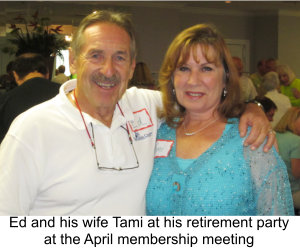 The Legacy Trail will be losing one of its “Most Valuable Players” on May 31 when Parks and Recreation specialist Ed Wolfenbarger retires after more than 15 years of service to Sarasota County.

Ed was a familiar presence along The Legacy Trail, whether it was rolling up his sleeves to remove invasive plants, helping to install informational kiosks or making sure daily the trail was in tip-top shape.

An invaluable friend and supporter of Friends of The Legacy Trail, Ed offered information, advice, guidance and assistance when attending  FLT Board meetings and general membership meetings. He played a key role planning and assisting with the annual Tour de Parks bike event. 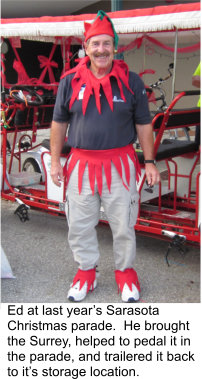 A native of Rockford, Ill., Ed joined Sarasota County Parks-Recreation in 2002. He got interested in parks and recreation as a youth,  he said. In high school, he worked as a life guard and water safety instructor for the Rockford Park District, the YMCA and the School District.

“The director of the Park District suggested I get a degree in recreation-parks management and said that Western Illinois University was a good school,” Ed said. “I took his advice.”

His favorite part of the job has been his work as an ambassador for the Legacy Trail, talking to and getting to know the people who use the 10.6-mile trail to walk, bike, run and commute.

“Working in the field with staff and volunteers,” said the 66-year-old Sarasota resident, “is where the rubber meets the road.”

Ed said he’s particularly enjoyed working with Friends of The Legacy Trail. FLT saluted Ed on April 5 with a retirement party as part of its April meeting. More than 50 people attended.

“I have worked with several volunteer organizations but none as professional and dynamic and Friends of The Legacy Trail,” he said.  “I have been blessed to be associated with such a dedicated hard working group of individuals.”

What’s next? Ed and his wife Tami plan to travel, then see where life leads them.

“I hope God will lead me to minister to folks along the way, especially the grandchildren,” Ed said.