The $8.6 million identified so far by the County is well short of the $20 million required by December 2017, as negotiated for the first acquisition phase.  It also appears increasingly unlikely that the rest of the $20 million will be secured in time.  So the question to extend the Legacy Trail to Payne Park in downtown Sarasota becomes:  Is $8.6 million enough for the parties to renegotiate and CSX to sell a shorter than planned segment of their unused rail corridor to Sarasota County?  The parties must quickly decide whether or not to proceed as the County and the Trust for Public Land need about six months to conduct their due diligence review of the property before the planned December purchase. 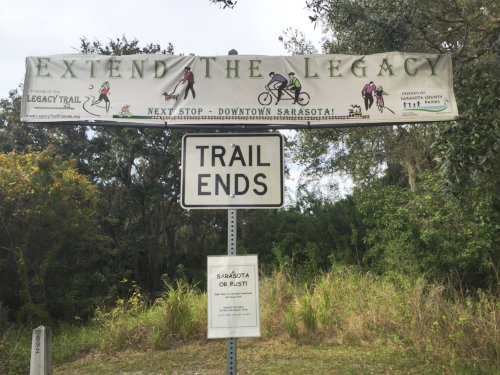 TPL, partnering with the County, came to terms to acquire the 7.5 mile long corridor and spurs from owner CSX and their lessee, Seminole Gulf Railroad, in February 2017 for $38 million.  That amount was split into two phases: Phase 1 from Culverhouse Nature Park to Bahia Vista for $20 million by December 2017; Phase 2 to Payne Park for $18 million by March 2019.  The due diligence includes conducting a hazardous materials environmental assessment, title search, and boundary survey.

Despite the Board of County Commissioners (BCC) directing the County Administrator to begin efforts to acquire the corridor in April 2015, no funding was included in the County budget to support the purchase.  The BCC began in mid February 2017 to grapple with funding options, and in mid March reprioritized $8.6 million in existing and expected 2018 County Parkland acquisition funds to apply towards buying the unused rail corridor.  However subsequent BCC meetings have identified no further funds.

While there are still a number of planned BCC budget meetings before the start of FY-18 on October 1st, there appear to be few attractive opportunities for marshaling substantial more funds for the extension.  The BCC has discussed tax increases on utility services and the county millage rate, both already at or near the lowest rates among Florida counties, to fund new initiatives including extending the Legacy Trail.  But even if enacted, revenue would not be received in time to be included in the December payment to CSX.  Bonding for the December payment is no longer an option, as the County attorney has ruled that bonding on the phase 1 acquisition would preclude the option to bond again for the second acquisition phase.

Representative Joe Gruter’s bill in Tallahassee to provide $15 million for the Legacy Trail failed to garner support from this year’s State Legislature.  Efforts by several local foundations to quietly pursue private donations from wealthy trail supporters remains a work in progress.  An Operating agreement between the County and The Friends of Legacy Trail which includes fundraising authority remains in review by the County staff, and must still be approved by the BCC.

We hope the parties agree to promptly and equitably revise the sale terms to acquire $8.6 million worth of the extension, and the County and TPL proceed with its due diligence to meet the December planned settlement.  We remain firm in our conviction that other governmental and private funds will materialize AFTER the County owns some segment of the extension.  The Friends of the Legacy Trail are developing and, once acquired, will be ready to launch a number of fund raising and promotional efforts to support the extension.  A possible November 2018 voter referendum could provide the balance of land acquisition and construction funds.