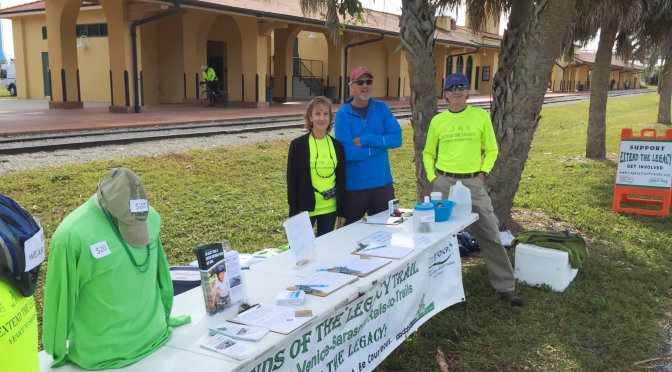 Sunday mornings of late, I strap on a plastic helmet, hop on my bike and beat it over to the Venice Train Depot, where I join a couple promoting the Legacy Trail for the “Friends of.”

I am the third wheel in our greeter group. I’m there to supplement the work of Darryl (a she) and Jerry (a he) Lang, who have faithfully staffed a table Sundays beneath a cabbage palm outside the train station for a year or more.

Darryl and Jerry are relative newcomers. Younger than I am, but retired from Ohio. In the process of selling a condo in Venice and buying a new home in Nokomis.

They’re the kind of resettlers who naturally fall into community involvement. In no time, Darryl has become membership coordinator (or some such) of the Friends of the Legacy Trail. They are excellent companions.

They also seem to like it here a lot.

From the feedback we get while gabbing with passersby, everybody likes it here a lot. That’s true of every person who has stopped at our information table. (Maps, T-shirts, water available.)

And one thing high on the likability spectrum is the trail itself. Bikers come from all over — Port Charlotte, North Port, Osprey and Sarasota. Ohio, New Jersey, Canada, Indiana and Ohio. (A lot of Buckeyes, hereabouts.)

The Sunday greeter experience leaves me more convinced than ever about the popularity of public “parks” like the Legacy Trail.

That’s plain from the people who stop when Darryl flags them down to “sign our petition.” (Jerry and I tend to soft-pedal a wave).

The petition isn’t official. It’s meant to indicate support to extend the current Legacy Trail another 7.5 miles to Payne Park in Sarasota. Everyone signs.

The trail now stretches 10.4 miles north from the Train Depot. From the depot, the Venetian Waterway Park trail runs south another 10 miles to Shamrock Park on one side of the waterway and Caspersen Beach on the other side.

The Sarasota County Commission has endorsed an extension study proposal. Feelers went out to CSX Transportation, which owns the track. Last report, the state Department of Transportation has taken over talks to acquire more than 100 miles of CSX lines for rails-to-trails conversion throughout the state. This is included.

Good thing. These things don’t come cheap. The Legacy Trail cost north of $30 million. (No wonder the county named it “legacy.”) Initial track acquisition costs for the next phase came in at $8 million-plus. Design and construction ranged from $16 million to $20 million. Give or take.

The Friends of the Legacy Trail won’t raise that kind of money selling T-shirts (lovely long-sleeve shirts available for $20 from me, Darryl or Jerry!) But, no doubt, Sunday survey says, build it and a lot more people will come and use it

Originally published in the Venice Gondolier 1/30/16
Permission  to include here given by Steve Baumann
instagram-150px
Trail Usage Last 12 Months
479,043
(Click for Details)