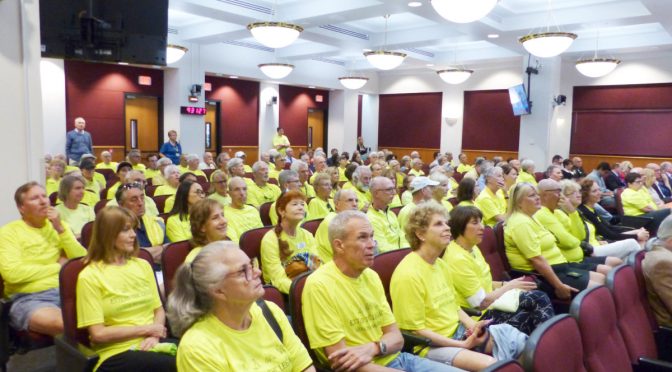 Amid a sea of unmistakable yellow “Extend the Legacy Trail” shirts filling the audience, endorsements from many public speakers, and having received hundreds of supportive, personalized emails, the County Commissioners began to consider how to buy the land to extend the Legacy Trail into Payne Park at a 15 February 2017 Board of County Commissioners meeting. The outcome left extension advocates cheering as the Commissioners unanimously directed the County staff to go find County funding options to more quickly acquire the corridor rather than await a county wide referendum in the regular November 2018 election, as recommended by staff.

A key milestone was a just-signed sale contract for the 7.5 mile corridor from owner CSX Corporation and its lessee Seminole Gulf Railway to the Trust for Public Land (TPL), who partnered with the County to negotiate the sale terms. The parties have been negotiating for nearly one year. Once ratified, TPL would in turn transfer the rail corridor to the County at the same cost. The $38 million contract price is split into two phases. Phase one requires $20 million by the end of this year for the portion of the corridor between the current end of the trail at Culverhouse Nature Park to Bahia Vista. Phase two calls for $18 million no later than 2019 for the remaining length to Payne Park. Though the cost is more than most expected, several commissioners noted it is 14 percent below the appraised value. There was no visible opposition to the price tag.

But where to find $20 million in the County’s $1 billion budget by this December? Possible sources mentioned at the hearing included bonding, mobility fees, tourism tax, and a millage (real estate) tax rate increase. In exhorting the staff, Commissioners noted “nothing is off the table,” “staff, don’t eliminate options,”the trail it is an investment, not an expense.”

Conveniently, the first of a series of budget workshops was held on February 17, 2017. The workshop aims to review priorities for fiscal year 2018, which begins on 1 October 2017. The Commissioners aggressively pursued funding opportunities. “We are scrapping for money here,” said Commissioner Hines in a theme that applies to all budget review processes, not just to fund the extension. Potential opportunities to free funds included revising Surtax III spending plans (the 1 percent discretionary sales tax that the state allows charter counties to apply on top of the 6 percent state levy), scaling back or deferring some capital improvement projects, accelerating the sale of surplus county lands, and levying up to a 10 percent public service tax that the state allows counties to apply to electric, water and natural/propane gas bills. It was noted that eight counties charge the full 10 percent on all utilities, eight change some portion, and four, including Sarasota, change nothing. It was further noted that Sarasota County has some of the lowest millage rate in the state, and has not raised the tax rate in over a decade. Moody’s has just raised the County’s bond rating, which would lower the County’s interest payments if it opts to raise funds via a bond.

While the Friends of the Legacy Trail remain an unabashed supporter for the extension, we don’t believe the County should have to pay for the entire expected $60 million land acquisition and construction cost. We firmly believe and are pursuing other viable funding opportunities from private and other governmental sources. But these other potential sources first require the County to commit funds towards the purchase of the corridor.

Thanks to all our Friends who supported the extension effort at this critical time. We commend the County Commissioners actions….and urge our extension supporters to keep the momentum going.