Warning: Option with value "1,3" not found in "wpgmza_filter_select" in /home/customer/www/friendsofthelegacytrail.org/public_html/wp-content/plugins/wp-google-maps/includes/class.dom-element.php on line 654 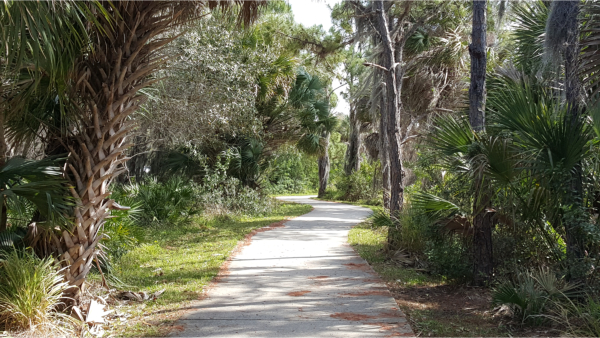 This 5-acre county park consists of a paved trail, boardwalk, and observation deck.  The meandering and scenic multi-use trail departs directly from The Legacy Trail at the Central Sarasota Parkway intersection and runs 0.7 miles (1.2 km) west to McIntosh Road.

The 8-foot width allows easy passing for bikes and pedestrians. The trail is nicely separated from the road and dense vegetation screens the road from view for most of the trail.  There are views of lakes on the south side.  Other amenities include informational plaques, benches, and a wildlife observation platform.

For those who prefer cycling off the road, there are several nice sidewalk routes in this area that connect with The Legacy Trail and/or Stoneybrook trail.  Many of the sidewalks in this part of Palmer Ranch are very pleasant for walking or cycling because they are separated from the road and tend to meander rather than following straight lines.

As you can see from the map, these suggested routes can be combined in various ways.

For those who prefer, there are also on-road bike lanes that can be used in this area; however, on some roads the bike lane runs in one direction only, so plan your route accordingly: