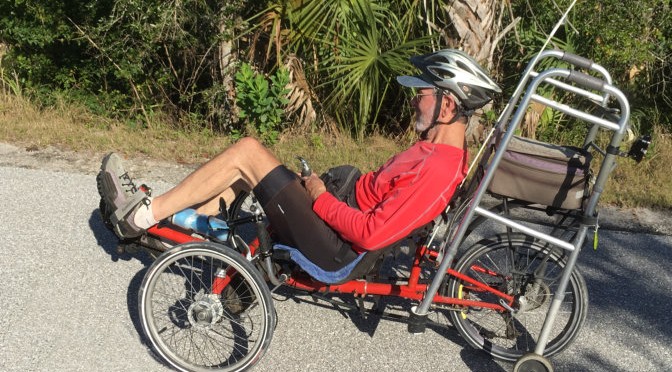 I am a frequent rider on The Legacy Trial and am always amazed at the diversity of users I encounter.  The other day I was just short of my planned turn-around point at the Venice train depot when I did a double take on a low-slung trike going in the other direction.   I got to the depot, turned, and started heading north. 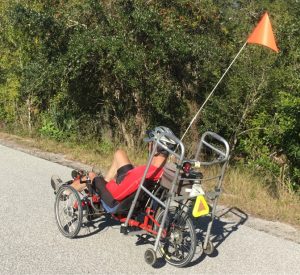 I caught up to the triker, and we started chatting for the next several miles.  “Nice rig you’ve got there” I said.  Dick said he enjoys the exercise and freedom that cycling provides.  As for the walker carefully attached to the back of his trike, well, he said, you do what you gotta do.  Dick told me he was in the middle of a planned 30-mile ride, and that he really appreciates the safety afforded by The Legacy Trail and Venetian Waterway Park compared to riding on roads.  I asked Dick if he minded my taking a picture of him riding his trike.  Sure he said with a big smile.  Later, as we parted ways, I told him that seeing him riding his trike made my day.  Thanks he said with that big grin.

The sun was shining, the sky was a deep blue with few clouds, and the wind was now in our back.  Another great day riding on The Legacy Trail.  But what I will remember most about this ride was meeting Dick with the big smile on his trike with the walker on the back.